A “piece of city”, not just a new building on the EPFL campus. Situated in the Quartier Nord of the Swiss Federal Polytechnic University of Lausanne, within the city limits of Ecublens, this group of buildings constitutes an entire neighbourhood of the Science City, including infrastructure that is indispensable to the reputation of the EPFL. Ideally situated next to the M1 metro station linking Renens with Lausanne, this complex includes the SwissTech Convention Center, which has a main auditorium that can hold up to 3,000 people.
The STCC occupies a large part of the “Quartier Nord”, of which it is the landmark building, but there is also student housing with 516 beds, the “Arcades” with shops and services on the square, and the SwissTech Hotel right next to the metro station. Parking for 275 vehicles and a public outdoor space, linking the two buildings, complete the design of a lively and open neighbourhood.

According to Patrick Aebischer, President of the EPFL, the Quartier Nord illustrates the Polytechnic University’s wish to increasingly make the scientific microcosm part of its urban environment. The campus thus resembles large international campuses that incorporate all components of society. Like a city within the city, the academic campus is alive 24 hours a day, flourishing both academically and socially.

Innovative financing was set up to allow the balancing of rental and running costs for a convention centre that is open to other types of events, not only scientific or academic, within the framework of a public-private partnership between the Swiss Confederation, HRS Real Estate SA, which provided planning and implementation for the whole neighbourhood, Credit Suisse Real Estate Fund LivingPlus and Credit Suisse Real Estate Fund Hospitality, two Credit Suisse AG real estate funds, which funded the entire general contractor agreement to the tune of 225 million Swiss francs.
This amount includes the construction of the entire Quartier Nord, of which the management is entrusted to the company by EPFL, which is the sole tenant of these buildings, built on land belonging to the Swiss Confederation, thanks to the granting of 99-year surface rights. General contractor HRS carried out all the building work.

Landmark building and lively campus. The Convention Center, like a faceted stone, has undoubtedly become a new symbol and a landmark in the landscape.
Its metal “shell”, generated by the interior space, rises in
stages from the ground, thus freeing up large glass surfaces turned towards the south (foyer side) and the north and allowing natural light to enter the auditorium, which can be subdivided according to various configurations, from several small halls to one large flat auditorium for banquets or other types of event. These partitions are possible thanks to a system of mobile walls and retractable seats.

The STCC also houses a large foyer that can also be used as an exhibition space and, on the lower level, various meeting rooms served by a second foyer. Its sup-porting structure is composed of two large, tri-dimensional metal beams resting on two pairs of reinforced concrete service shafts placed in the center and at the north of the building.
On the south side, these beams are cantilevered. The anodised aluminium roof cladding contrasts with the more intimate and refined character of all the interior natural wood cladding. In turn, the lightness of the interior cladding contrasts with the imposing presence of the vertical cores and the large balconies in the auditorium and foyer. Despite the marked difference in language between the Convention Center and the rest of the complex, the unity of the whole is ensured by use of similar materials.

For example, aluminium shutters are integrated into the facades of the housing. In contrast to the buildings facing the public space, where the shine of metal predominates, a material well adapted to the specific nature of a Polytechnic University, the housing has a more intimate and convivial character with its coloured facades and interior patios.

East of the site, the student housing building clearly delimits the Quartier Nord public space, extending southwards as far as the metro station. The retail outlets and restaurants are sheltered by a covered gallery beneath the hotel and student accommodation.

The scale of the building is softened by a series of articulations and height variations between the different volumes. Only the main wings of the building rise to 8 floors. The exterior facades with their silk-screened glass and anodised aluminium louvres clearly interact with the SwissTech Convention Center, whereas the coloured window frames anticipate the lively atmosphere of the interior courtyard.

The studio apartments are located along both sides of a long interior hallway that crosses the main wing of the building.
In order to encourage social interaction among students, various common areas are sited along this indoor street. These single or double-height spaces are enclosed by brightly coloured glass panels, an echo of Catherine Bolle’s polychrome work for the “Chromoscope”.
The shared apartments, for up to 8 students, are located along the access walkways. Semi-private living spaces lead to individual rooms, each with a private bathroom. All bedrooms are sited on the outer perimeter while the living spaces open directly onto the access walkways surrounding the courtyards.
The facades of the walkways are entirely covered with fibre-cement panels individually painted by artist Catherine Bolle, forming the “Chromoscope”. 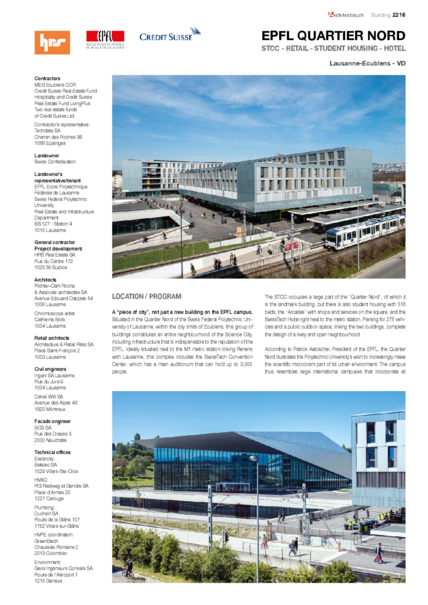